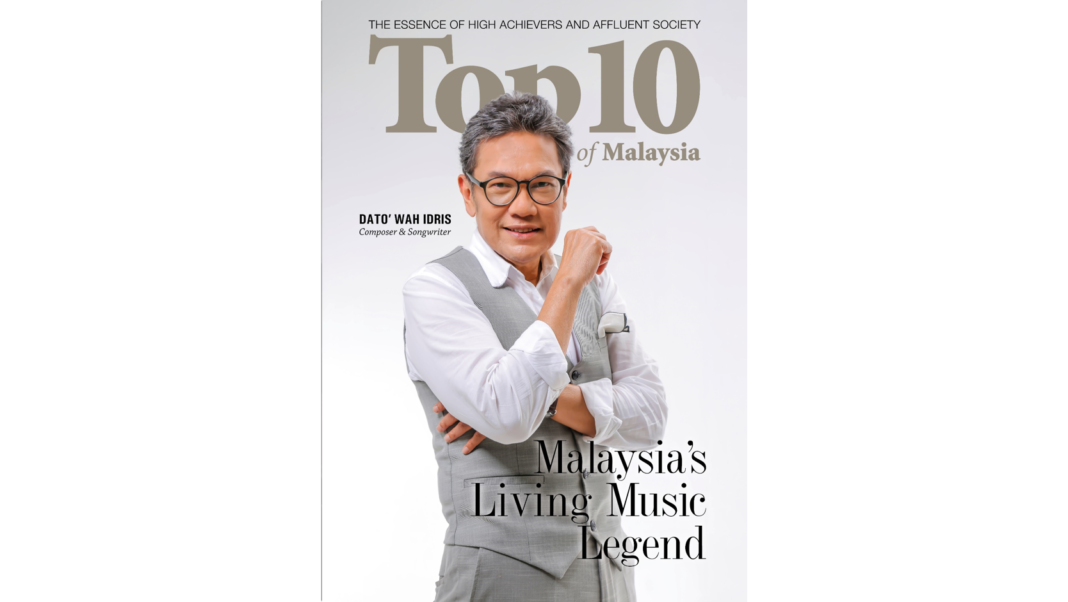 Malaysia’s renowned performer, musician and record producer, Dato’ Wah Idris has amazed the country and also the whole world with his famous patriotic hit songs that are played globally and locally. Besides having over 30 years of experience in the entertainment industry under his belt, Dato’ Wah Idris has also made a name for himself in the area of music and brand video development.

“Ever since I was a kid, I enjoyed playing with musical instruments at home. Fortunately, I had all the musical instruments and I love to create simple music melody and transform it into a song,” says the talented composer and songwriter. “Music is in my blood so I never get bored listening to all kinds of music be it jazz, rock, pop, R&B, classic, hip hop or blues.”

“When I was in America, I worked as a composer, performer and musician for two years,” says Dato’ Wah Idris. “I was in an American band known as the ‘Sketches’.” After graduating from the prestigious Berklee College of Music in Boston, he returned to Malaysia and became a winner in various local and international Song Festival Awards events he took part in. He became the first Malaysian to win an International Music Award at the “Golden Kite World Song Festival” in 1986 and that has paved the way for other Malaysians to be recognised globally as well.

“I was signed as a recording artist and producer with two international recording companies, WEA and CBS – now known as Sony Music,” shares the music composer. “During my tenure as a recording artiste and producer, I have worked with many artistes in Malaysia and also overseas. I was also part of the 1st International Jazz Festival held in Kuala Lumpur and was also the Keyboardist and Music Director for the “Malaysian All Stars Big Band” 1983.”

“In the late 1980’s, I worked closely with Kuala Lumpur City Hall and Ministry of Culture, Arts and Tourism by creating and developing a special weekly Music and Cultural Show for local and international tourists,” says the music legend. “It was a successful entertainment show called “An Evening in KL” that was held for five years.” He then created history by being the founder of “Malaysian Drums Symphony”, an orchestration of ethnic drummers with performers from Malay, Chinese, Indian, Bhangra and Orang Asli ethnicities who performed at Ministry of Culture, Arts and Tourism and Corporate events in 1990.

“I recruited top musicians from all over the world during the period from 1995 to 1996 to stage nationwide concerts that assisted in building a strong brand name for my corporate client and Tourism Malaysia,” reminisces Dato’ Wah Idris. “1998 was a historic moment for me. I was responsible for branding “KL Commonwealth Games ‘98 Malaysia” to the world by creating a beautiful song “Standing in the Eyes of The World” that was sung by Malaysia’s Queen of Rock, Ella. I co-wrote the music with international superstar David Gates from the defunct band “The Bread” during the KL Commonwealth Games 1998 held in Malaysia. It was the most successful and the biggest event ever held in the history of sports in Malaysia.”

In 2003, Dato’ Wah Idris was tasked with re-arranging the melody of Malaysia’s national anthem, ‘NegaraKu’. “I was conducting the world-class Malaysian Philharmonic Orchestra before the then Prime Minister Tun Dr Mahathir Mohamadt at that time. “The fine-tuned version of the ‘NegaraKu’ was presented to the Cabinet and endorsed by the Government. It was launched by His Majesty the Yang DiPertuan Agong during the Merdeka Day Celebration held in Putrajaya,” says the famous composer.

Dato’ Wah soared to greater heights when he was offered to initiate, lead and become the Dean for the Faculty of Medical Hospitality, Tourism and Performing Arts with Allianze University College of Medical Sciences based in Kepala Batas, Penang in 2011. “My main tasks were to develop the faculty’s education with high quality standards as well as help students reach their greatest potential,” shares the accomplished musician.

The talented composer also has plans to establish a foundation called Malaysian Heritage Music Foundation (MHM). “Music plays an important role in our daily lives. I believe an establishment such as MHM would be able to preserve our country’s rich musical heritage. The idea is for MHM to play the role of preserving and also promoting past original music from the 1900s,” says Dato’ Wah Idris.

“I’m currently working on a special project song for Penang called “Vision Penang 2030”. It is interesting because the song is so commercialised and it has beautiful lyrics to talk about future development for Penang. It could also be Penang’s anthem song,” says Dato’ Wah excitedly. “The song itself is so meaningful and has a catchy melody to it. It reminds me of a song I wrote for Tourism Malaysia years ago called “Malaysia Truly Asia”.

“I would say my greatest achievement in life is to become the first Malaysian to win in the World Song Music Festival, composed “Standing in the Eyes of the World” and “Malaysia Truly Asia” as well as rearranging the “Negaraku”, says Dato’ Wah Idris proudly. “They are so important to me because the songs have been played and heard all over the world. It makes people proud to be Malaysians as the songs have beautiful melodies and lyrics.”

Dato’ Wah’s advice for young aspiring composers is to never give up. “Believe in yourself, look at the positive side and learn as much as you can. Don’t look back but instead move forward with a great resolve to expand your musical horizon.”

RIDING ON THE WAVES OF SUCCESS

A Deep Hunger and Passion for Knowledge

EMBRACING THE SWEET FRAGRANCE OF SUCCESS

A HEART FOR THE WELL-BEING OF PEOPLE

This site uses Akismet to reduce spam. Learn how your comment data is processed.

The Top 10 of Malaysia is an English language magazine owned and published by RHA Media Sdn Bhd. The acronym ‘RHA’ is derived from the words, ‘Research House of Asia’.
Contact us: pr@top10premier.com

RIDING ON THE WAVES OF SUCCESS

Garnering Success through Creativity and Diligence